Movers and shakers in sports & leisure

Movers and shakers in sports & leisure

From amazon.co.uk. The work of Sir Billy Howe appears complete—the Atlantic is no more: 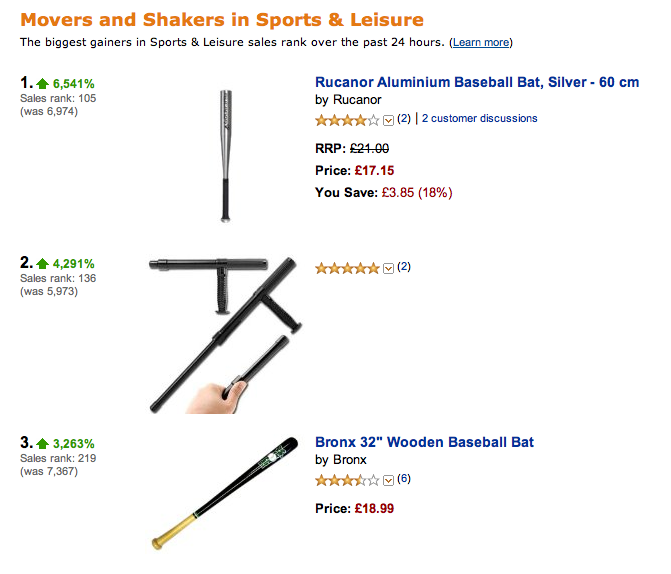 Movers and shakers #4, #5, and #6 evince the same remarkable upsurge—in the last 24 hours!—in transatlantic attention to our romantic national pastime. Now that’s what I call a special relationship! Can an expansion team be far behind? The London Chavs, perhaps? But why is no one buying gloves? UK readers please note: barehanding a long fly ball is no joke.

You’re displaying remarkable perspicuity, however, in voting aluminium. Admittedly, the “Bronx” brand exerts a powerful fashion attraction. But not only is the aluminium bat cheaper, it’s almost impossible to break. There’s not much use in a broken baseball bat. And remember: the strike zone starts at the knees.

Everyone from all sides of London meet up at the heart of London (central) OXFORD CIRCUS!!, Bare SHOPS are gonna get smashed up so come get some (free stuff!!!) fuck the feds we will send them back with OUR riot! >:O Dead the ends and colour war for now so if you see a brother... SALUT! if you see a fed... SHOOT! We need more MAN then feds so Everyone run wild, all of london and others are invited! Pure terror and havoc & Free stuff....just smash shop windows and cart out da stuff u want! Oxford Circus!!!!! 9pm, we don’t need pussyhole feds to run the streets and put our brothers in jail so tool up, its a free world so have fun running wild shopping;) Oxford Circus 9pm if u see a fed stopping a brother JUMP IN!!! EVERYONE JUMP IN niggers will be lurking about, all blacked out we strike at 9:15pm-9:30pm, make sure ur there see you there. REMEMBA DA LOCATION!!! OXFORD CIRCUS!!! MUST REBROADCAST TO ALL CONTACTS!!!”

All the Millenniums I ever heard of heretofore were to be preceded by a “chaining of the Devil for a thousand years,” — laying him up, tied neck and heels, and put beyond stirring, as the preliminary. You too have been taking preliminary steps, with more and more ardour, for a thirty years back; but they seem to be all in the opposite direction: a cutting asunder of straps and ties, wherever you might find them; pretty indiscriminate of choice in the matter: a general repeal of old regulations, fetters, and restrictions (restrictions on the Devil originally, I believe, for most part, but now fallen slack and ineffectual), which had become unpleasant to many of you, — with loud shouting from the multitude, as strap after strap was cut, “Glory, glory, another strap is gone!”— this, I think, has mainly been the sublime legislative industry of Parliament since it became “Reform Parliament;” victoriously successful, and thought sublime and beneficent by some.

So that now hardly any limb of the Devil has a thrum, or tatter of rope or leather left upon it: — there needs almost superhuman heroism in you to “whip” a Garotter; no Fenian taken with the reddest hand is to be meddled with, under penalties; hardly a murderer, never so detestable and hideous, but you find him “insane,” and board him at the public expense, a very peculiar British Prytaneum And in fact, THE DEVIL (he, verily, if you will consider the sense of words) is likewise become an Emancipated Gentleman; lithe of limb as in Adam and Eve’s time, and scarcely a toe or finger of him tied any more. And you, my astonishing friends, you are certainly getting into a millennium, such as never was before, — hardly even in the dreams of Bedlam.

“Enormous Megatherions, ugly as were ever born of mud.” “Fuck the feds, dead the ends, and color war for now.” “Hardly even in the dreams of Bedlam.” “Niggers will be lurking about, all blacked out.” Who can deny that history itself is a poem? A nigger’s got to admit—it’s epic. If only we knew the ending!